Checkers or Draughts is a game with a long history. The reason why it became an evergreen is because it is a very straightforward game with little rules. Most obvious reason for this is the fact that all pieces are the same. Same size, same value, only different colors for both parties. You could basically play the game with rocks or seashell if you found enough that look the same…:).

Since it would probably take you more time to hunt for the rocks or seashell then to play several games. It would be easier to have a set of standard stones and a board at your desposal. I asume that in the past one would bring 2 branches and a hand saw and make a set when needed! A few beer caps would do the trick as well. But if you have to drink them first I am not sure if you make it to play!

Like with many games it is hard to pinpoint their origin and their year of birth. It is possible that the game of checkers or draughts in it’s current for was derived from games played by the ancient Egyptians, Arabs and Greek. Boards with 64 ( 8 x 8) or 100 squares (10 x 10 ) and rounded stones have been found through out the human history in pictures as well as in writing. According to the very witty and vintage cool website : The Online Museum of Checkers History the earliest modern form of Draughts or Checkers was written down in 1756 in the United Kingdom. From there is spread around the world under various names and with slight differences.

The setup checkers board & checker pieces 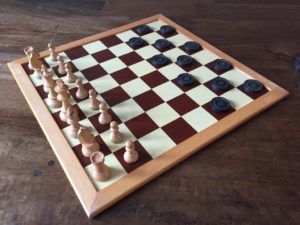 Checkers or draught can be found in many different combination and sizes. It can be played on a standard 8 x 8 square chess board using 12 stones (or pieces) each as shown above. An other well known variation is the 10 x 10 board with 20 pieces of each color. Shown below.

Often a chess board ( 8 x 8) has the 10 x 10 division on the back. I have also seen a ” Jue de Moulin” game (Mill game / Molen spel) board with checkers (Dam Spel) on the other side. Both using the same pieces (shown below). 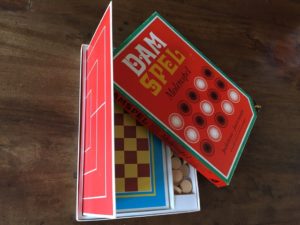 In addition I am not sure if pieces need to be round. I suppose some bottle caps will work just fine for a quick game?! And of course there are giant boards made to be played outdoors as well. 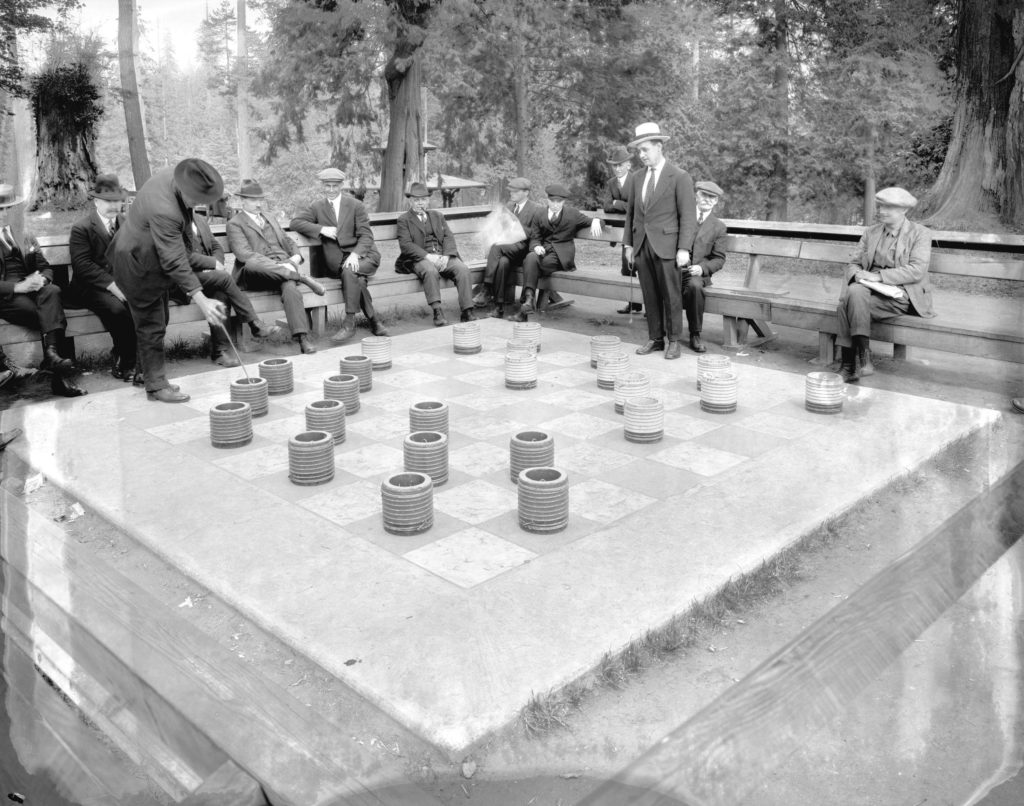 As stated before the game can be played on a 64 square board (eight rows of dark and light colored squares) or 100 square board with 1o x 10 rows. You need two players which both begin the game with 12 pieces / 20 pieces in their own color. The 12 (20) pieces are placed on the 3 (4) rows of dark squares closest to the player. The players will then be making one move at a time, white starts.

The objective of the game is to create a situation in which the opponent can’t make a move. This is achieved by taking all pieces or maneuvering pieces to block opponent pieces. If both the players can’t move anywhere, the game will end in a draw / tie.

A single pieces only moves in a forward diagonal direction into an empty square. When an opponent’s piece occupies the next square, that piece can be jumped and removed from the board. The next square needs to empty and it needs to be a single piece. You can not jump your own pieces. When a player reaches other side of the board, their piece will be promoted to “King”, by placing one of the earlier captured pieces of the same color on top of it. A ‘King’ can move forward and backward and jump as many times as it is able to when the required squares are empty. There can be more Kings at the same time on both sides. A King can still not jump over the same color pieces, but it can jump in different direction after capturing a piece.

Since they are often played on the same board it would make sense to ask yourself if both games are alike? There are chess-clubs and checker- clubs. Both games have their seperate followers and their own tournaments. And if you ask any of them, they probably claim their game is supperior.

My 2 cents on the matter? I think I would make a better openent playing checkers after a few beers then I would make a chess-player. I think with checkers it is a lot like dominos (see article: bar games that we used to play: dominos). Chess just has more different pieces, more combinations and more areas over the board that you can battle in, while checkers is more focussed on the front line and later in the game on the Damms?? 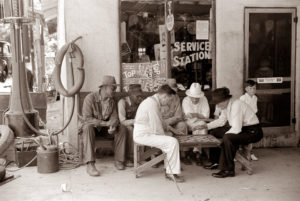 Still. Checkers makes a great vintage man game, every time around! Of course we offer for sale vintage bar games like sets of checkers pieces, Draught pieces as well as vintage checker / chess boards and a wide range of other vintage bar games. Game on.

END_OF_DOCUMENT_TOKEN_TO_BE_REPLACED

Some ancient history and perspective Before the early automatic wrist watches, there were pocket watches.These marvelous pieces of engineering were somewhat bulky since size was restricted only by th...

END_OF_DOCUMENT_TOKEN_TO_BE_REPLACED

Grinding roasted coffee beans is hard work when doing it by hand.  So let's call it a manly job! I like to share some information here on the art of coffee grinding for a great cup of coffee....vintag...

END_OF_DOCUMENT_TOKEN_TO_BE_REPLACED

There are several things I am interested in. Amongst these are drinking beer, collecting and vintage stuff. Resulting in picking up vintage beer mugs whenever I can. I think the region I live in is ve...

END_OF_DOCUMENT_TOKEN_TO_BE_REPLACED

In celebration of the 1000th item added to VintageManStuff.com today (August 23th 2019) I awarded myself this 1930 statue of a Vintage Man holding his stuff (being a ball in this case)! You can check ...

END_OF_DOCUMENT_TOKEN_TO_BE_REPLACED

I was actually  wondering if it would be possible to pick up some vintage items in the USA. It seems thrifting is the equivalent but just a bit different. Like in the UK and in the Netherlands there a...

END_OF_DOCUMENT_TOKEN_TO_BE_REPLACED

About the Bang and Olufsen Company Svend Olufsen (born 1897) and his friend Peter Bang (born 1900), Both from Denmark started working together from the attic on the Olufsen family house late 1924. In...

END_OF_DOCUMENT_TOKEN_TO_BE_REPLACED

The 5 vintage things every man should have

When a man is buying his stuff he unconsiously takes a few rules into account. First shopping must be easy, when there are not a lot of shops close together then better bought online. Second his stuff...