There are several things I am interested in. Amongst these are drinking beer, collecting and vintage stuff. Resulting in picking up vintage beer mugs whenever I can. I think the region I live in is very good for this. In the Netherlands we have several world famous breweries like Heineken. But being close to Germany, Belgium and France results in very different styles, brands and ages for picking out these great vintage beer mugs. The top pictures shows a few and how I hang them in my man cave.

As a non native English speaker, it took me a while to find out the differences in between vintage beer Stoneware, Beer glasses, vintage beer Steins, beer Mugs and Tankards. As far as the definitions go…what I found is as follows and is also the way I describe the breweriana I offer for sale in the shop here on the Vintage Man Stuff website. First of all I should indicate I am focussing on beer vessels with a handle. These are commonly referred to as beer mugs, see below. 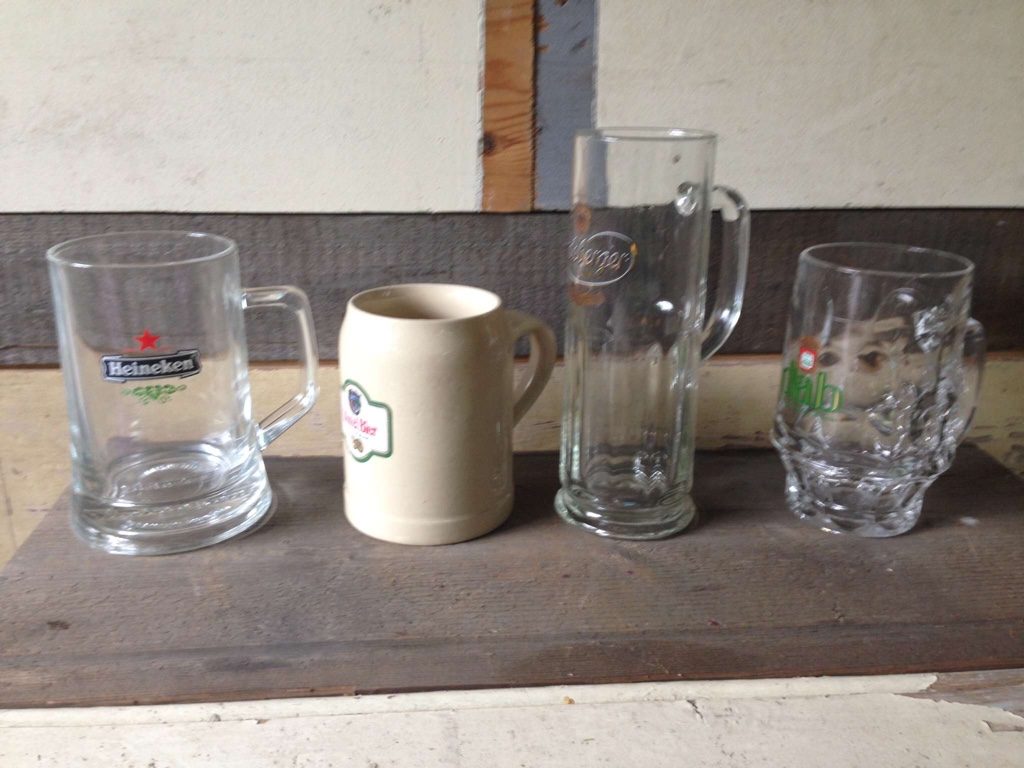 But these beer mugs are not all the same. It seems size or shape does not really matters, as long as it has a handle of course. But  the material used is quite important. Because when it is made of ceramic or earlier clay it could best be referred to as stoneware or as I prefer a stoneware beer mug rather then a glass beer mug.. just to be clear. So below there are 2 beer mugs 0,25 l left and 1 liter on the right. The one in the middle, even though it can hold 0,5 liter of Hoegaarden white beer…it is still a glass. 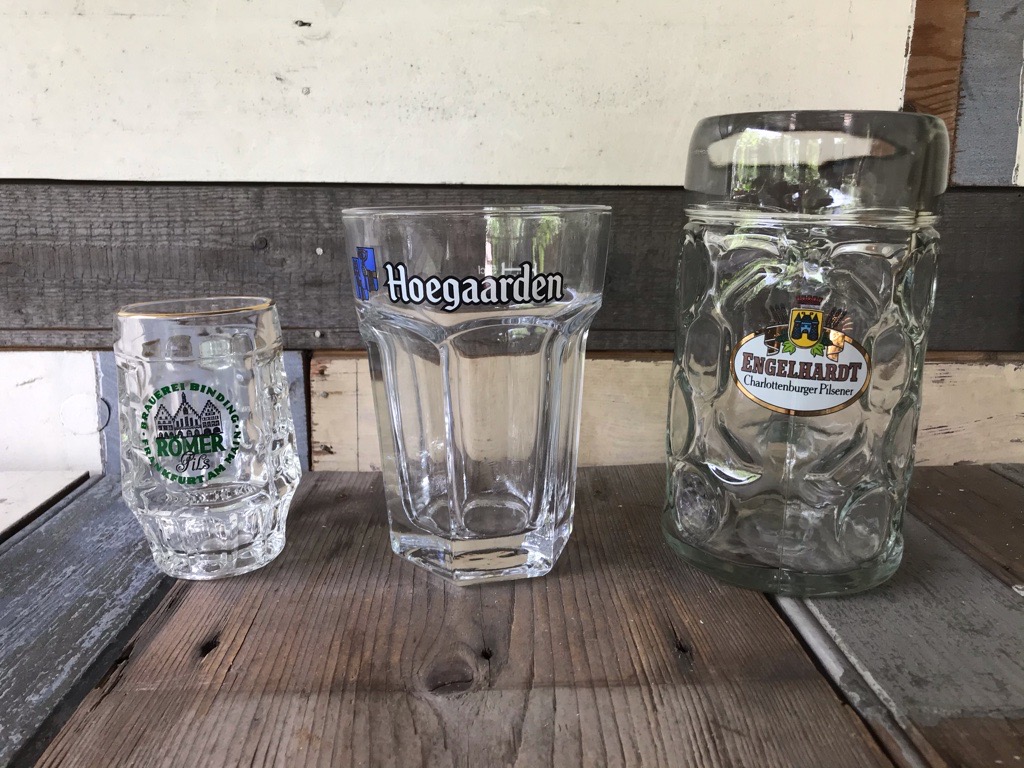 Below some stoneware beer mugs but with the 2 on the side showing them with metal lids. These lids make the name change from beer mug to beer Stein. Where the Stein is German for “stone” but it also indicates a vessel made of stone with a lid. The lid is from the dark ages and is almost always made of pewter. It opens and closes easily with a thumb gesture only! It is there to stop foreign matter entering your beer, rather then beer mysteriously escaping..but I think that is a great secondary function. More about the beer Stein and the pewter lid below in this article. 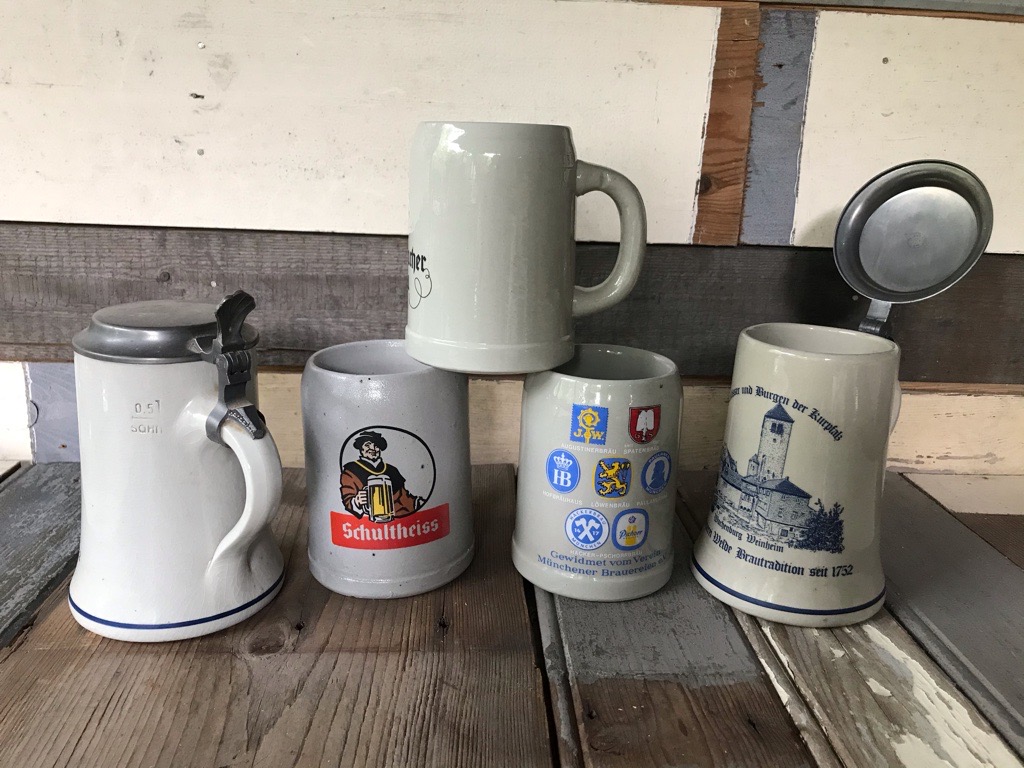 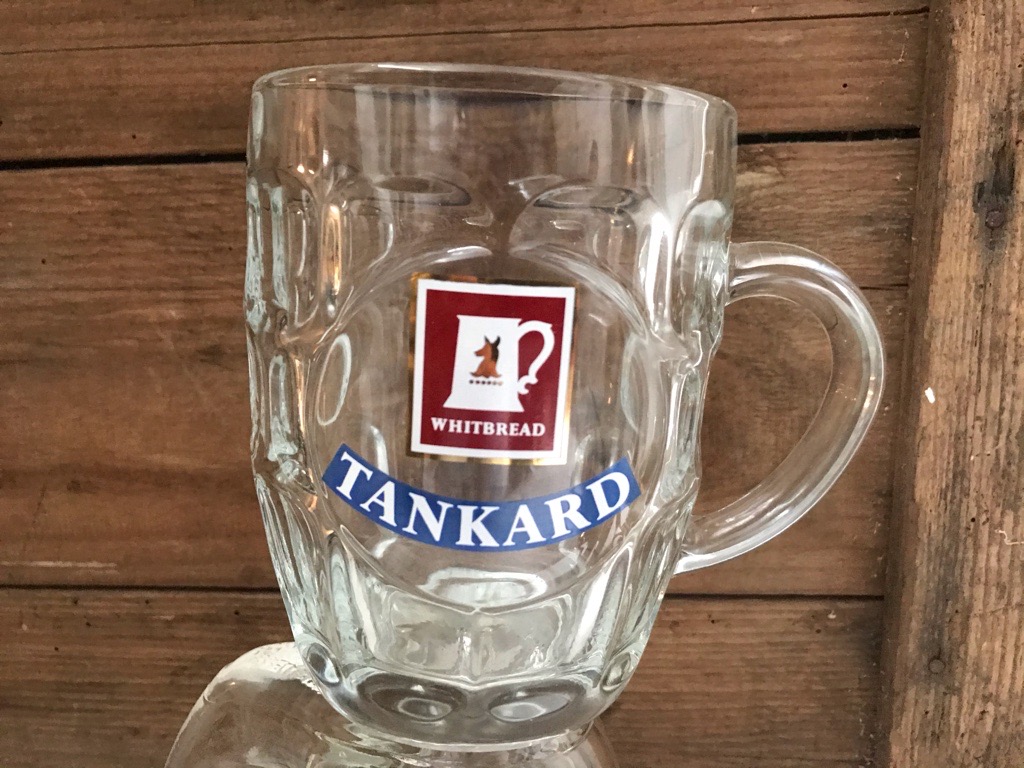 So what you will mostly find on vintagemanstuff.com is glass beer mugs and stoneware beer mugs for different beer brands, with an occasional beer Stein or Tankard. Or perhaps even something in between like this all pewter tankard with lid. In addition they will we be mostly from 1960 – 2010 because this is the period that beer brands started branding there beers with custom drinking vessels.

The vintage beer mug in many sizes

Beer mugs (glass or otherwise) come in different sizes. The picture below shows 4 very different glass mugs in the size 0,2 liter, 0,3 liter, 0,4 and 0,5 liter. The first came from a beer Festival in Germany I attended! Other common sizes are 0,25 liter, 1 liter for the European mainland and then there is the pint measure for the UK. 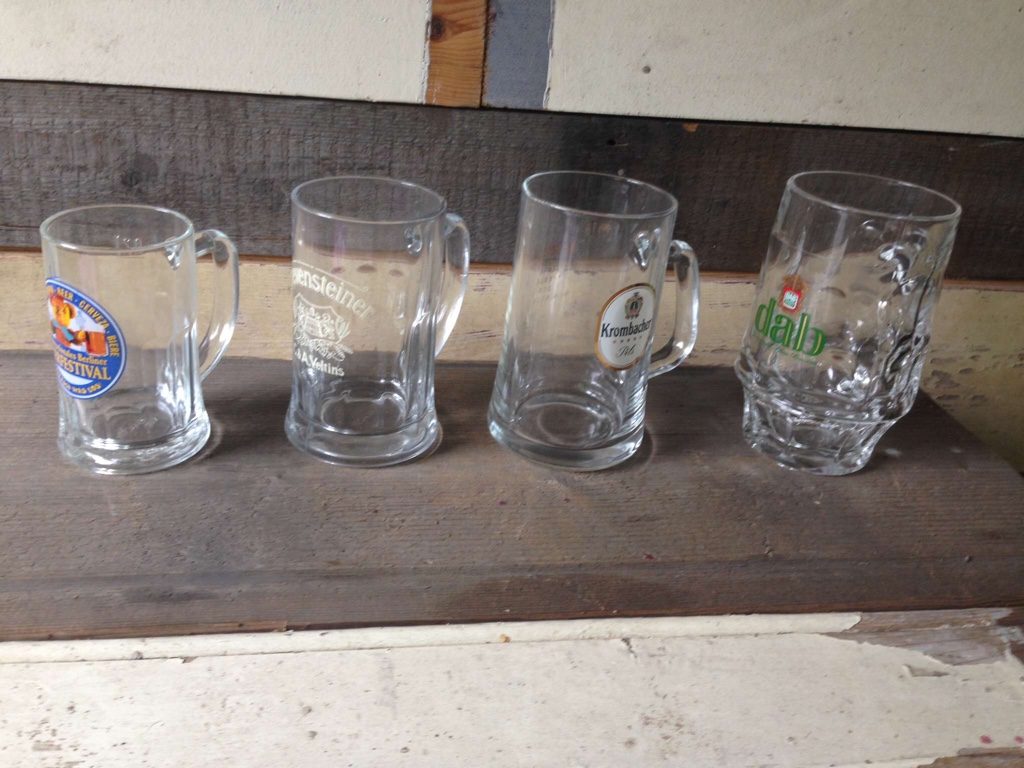 If you were to take interest in just a single size it would make the collection more focused of course. If this would spike your interest I could recommend the size 0,5 liter or half a liter or the size 0,25 – a quarter liter which are most common and still a bit drinkable, depending on your beer preferences of course. Most special brewed ales come in smaller bottles while many of the Pilsners seem to be available in half liters. But doubling up on a special ale is a great way to fill your glass as well. Eventough I thing that Hoegaarden intended their 0,5 liter glasses to be filled fresh with draft beer at the local watering hole.

Below is a picture of some odd versions of the vintage beer mug I collected. First there is the chalice by a Dutch brand called Hertog Jan. Not a mug, but the logo shows a person drinking from a beer mug. The second is a German branded DAB beer glass mug with a cool tapered shape. The third is by a Belgium brand called Keizer Karel beer with 3 handles in a clay version (stoneware), which is actual a re-edition of  early mugs used in the dark ages. And last is a horn shape glass mug. These are besides the more “normal” shaped ones shown earlier which are more straight in form or have dimple designs. 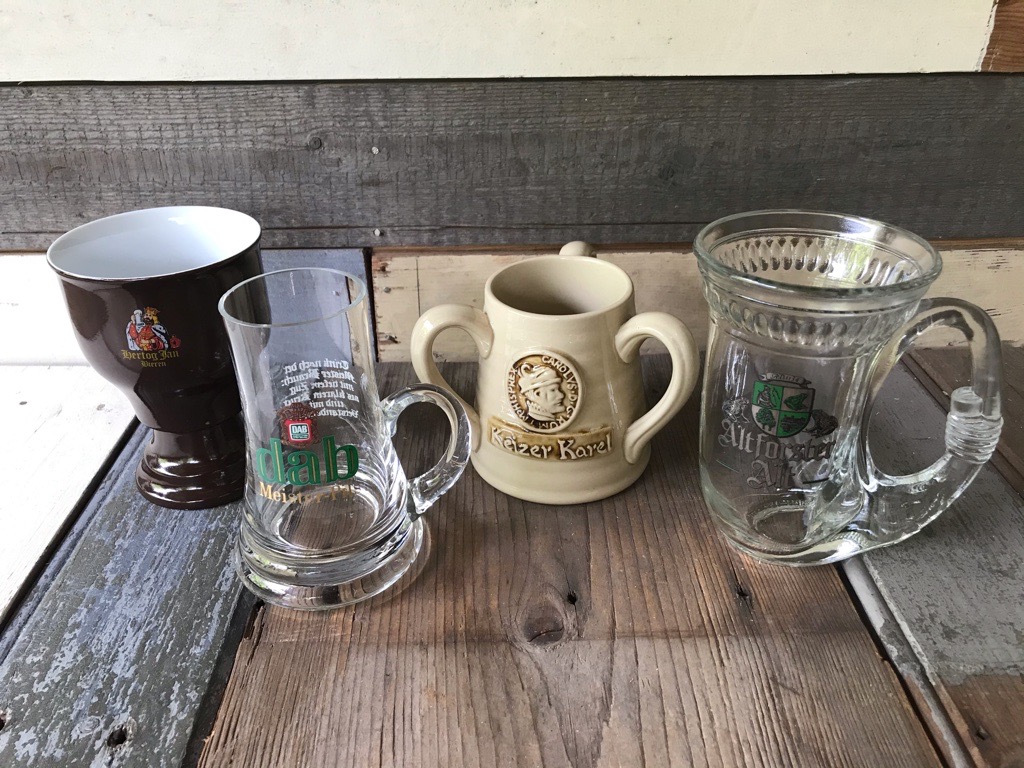 What I see when looking at the wide variety of vintage beer mugs from the 1960’s – 2010’s are the many different markings. Markings on the bottom as well as on the sides, mostly found near the rim or close to the handle, as shown below. These could be marks showing the size or amount of beer it can hold. These are often followed by the “l / L” for Liter. There are also makers marks like SAHM for Sahm – Rastal which is a German glassware designer. 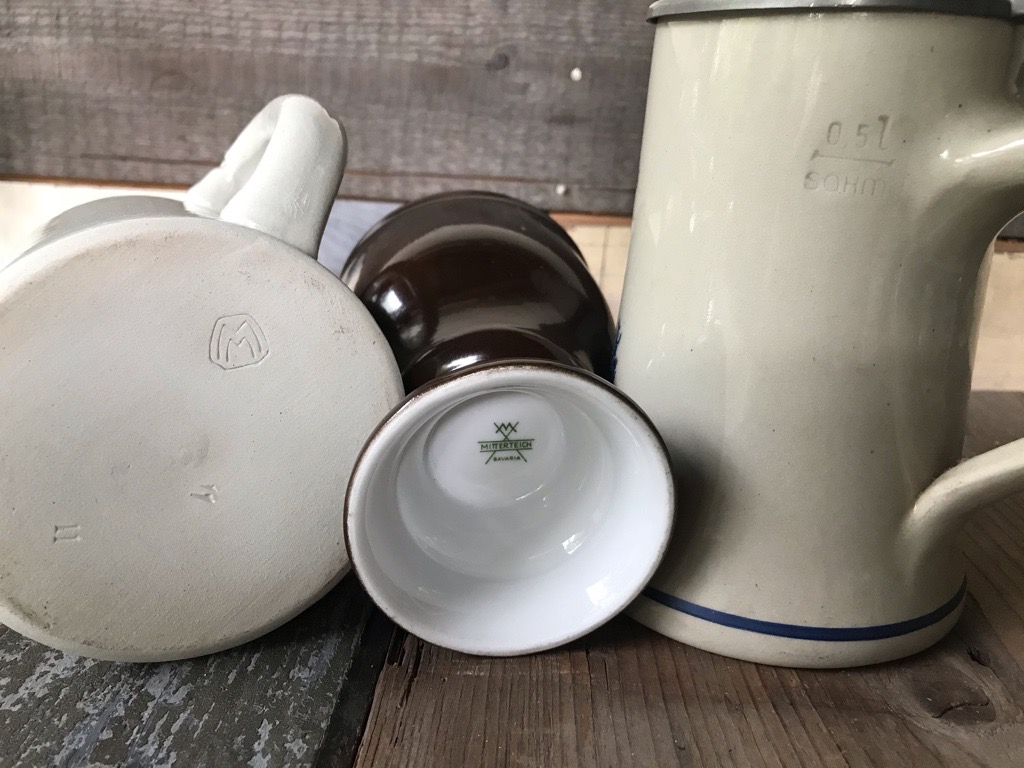 The glass beer mug in the middle shows the 0,5L mark as well as an older 50 mark in “writing”. The one on the left has a TG mark which could be a maker or perhaps indicate Tempered Glass, pointing towards the sturdiness of the produced glass. The one on the right just has a small number, which could indicate a year or production run. 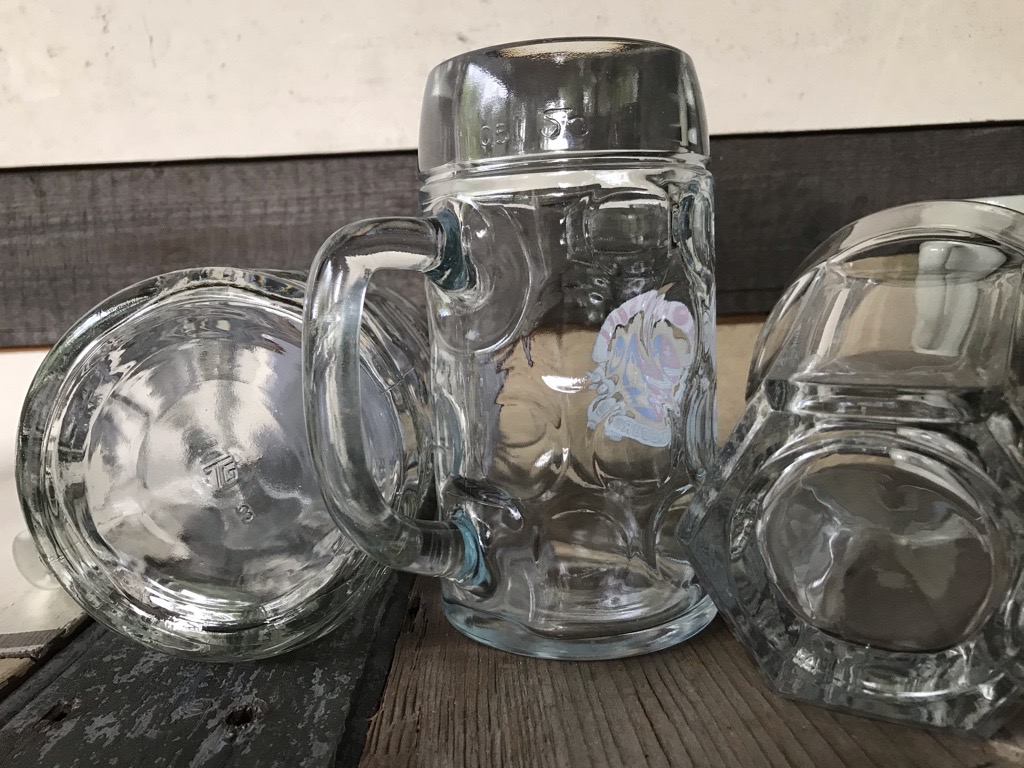 These small marks can just tell a little more about the glass and it’s age as well as it’s country of production, the designer or the manufacturer. Always nice to get to know your price possession a little better. I also am a ferm believer that marks are indicators of quality in general. It takes extra time and effort to leave your mark on something as well as the professionalism and pride involved!

For vintage beer Steins and there pewter tops goes the same. Pewter shows it’s age by darkening over time. This comes from use as well as sunlight. Mostly when the inside is less dark then the outside top it shows it has a bit of age. The darker the pewter gets, the more age it has. 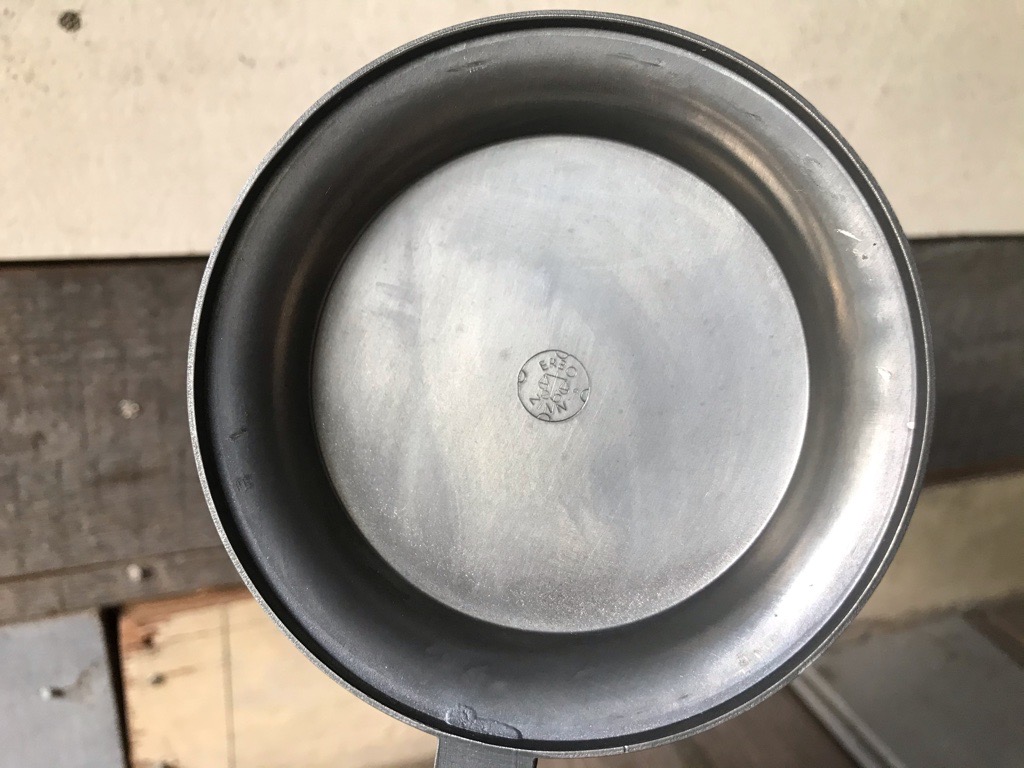 For centuries the metal workers are forced to mark their products so the purity of the metal can be controlled and recognized. So all quality pewter tops need to have at least a makers mark clearly stamped (mostly on the inside as shown above. Pewter is a soft metal which is easy to cast so these tops and thumb rest can be quite ornate as shown below. 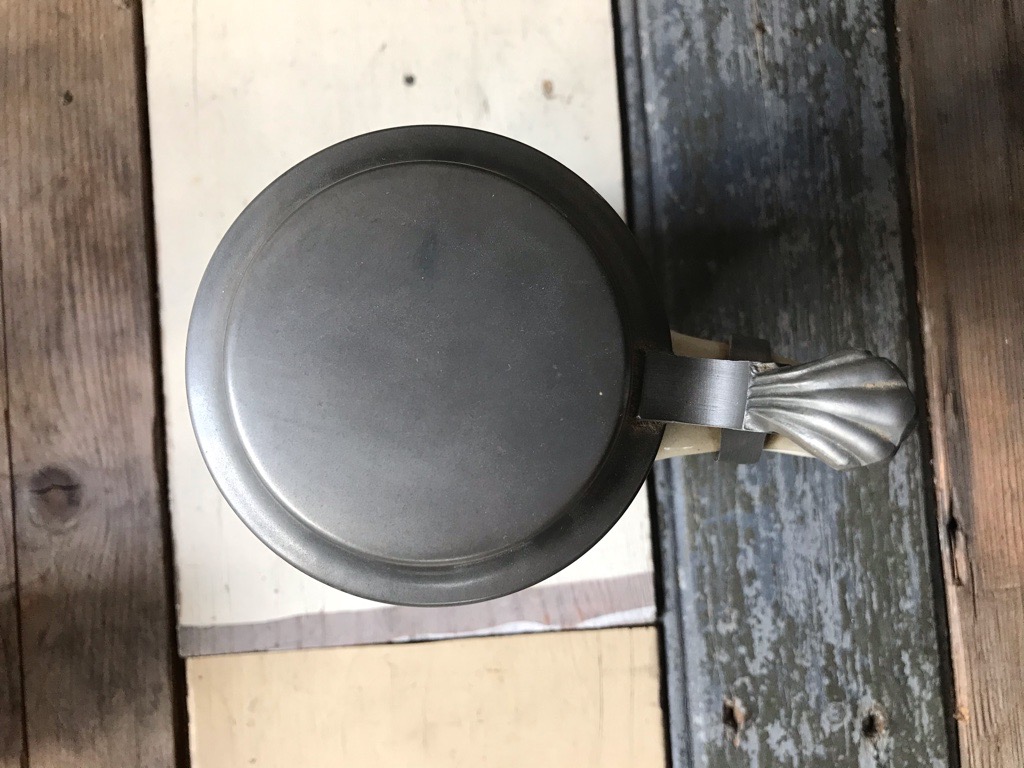 The pewter handle fitting showing both sides above and below are marked on both sides as well. Above reads “Handarb.” which stands for Hand Made and below it reads “Reg.” for registed trade mark. This is another indication for the quality and pride gone into the fabrication. 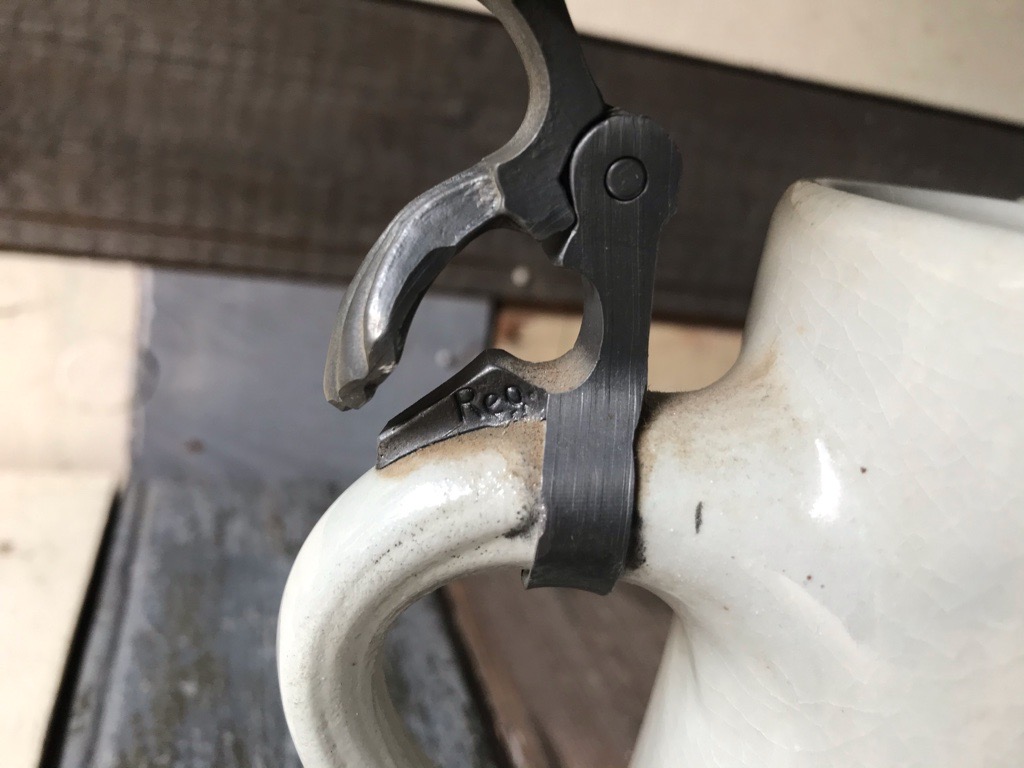 Take good care of the Steins with pewter tops because pewter is a soft material and can be bent when forced. There are also restriction to use pewter for containers of food but when the manufacturer follow the guidelines it is safe to use this way..still I would not advise to tast it.

The vintage beer mug is a field of collecting with a huge variation. If you like to read up some more on these great beer tools, try this article on the English dimpled beer mug history. Apart from the history and collectability, they look great in any man cave or vintage inspired drinking hole. But most of all, they are very practical when having friend over. Cheers.

END_OF_DOCUMENT_TOKEN_TO_BE_REPLACED

Checkers or Draughts is a game with a long history. The reason why it became an evergreen is because it is a very straightforward game with little rules. Most obvious reason for this is the fact that ...