There are lots of names for small figures that are used as a toy. The are being called mostly after the material they were made off. So we have the woden, paper and tin soldiers. Which are the oldest materials used as well. But these figures became really well known when they became lead model soldiers or pewter soldiers. But all in all, when using the words Toy Soldiers, everybody knows what the are talking about. These toy soldiers are not always good models but they did representing soldiers, men and women from ancient times to the present day. So much was clear. The earliest ones were made of paper or carft from wood, later made of tin, and were real toys. The later pewter and lead allay soldiers is what this blog is in general refering to when talking about Toy Soldiers. Below the Toy Soldiers general history in short.

The Toy Soldiers come in different sizes, usually between 30 millimeters and 75 millimeters, measured between the base plate and the eyes to compensate for the height of the head-gear. There are 3 types of toy soldiers: 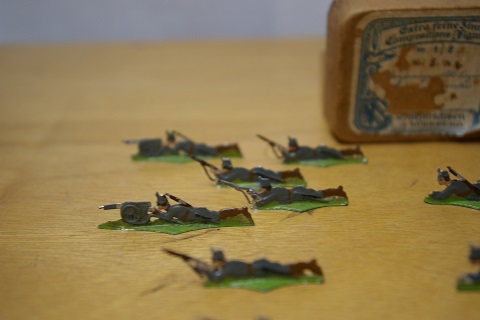 flats made by Heinrichsen

2. Semi-flats: These are a few millimeters thicker then the flats. In the case of cavalry, often produced with a semi-flat horse and a rounder rider. The sailor in the first picture of this article are also semi flat figures from about 1910. 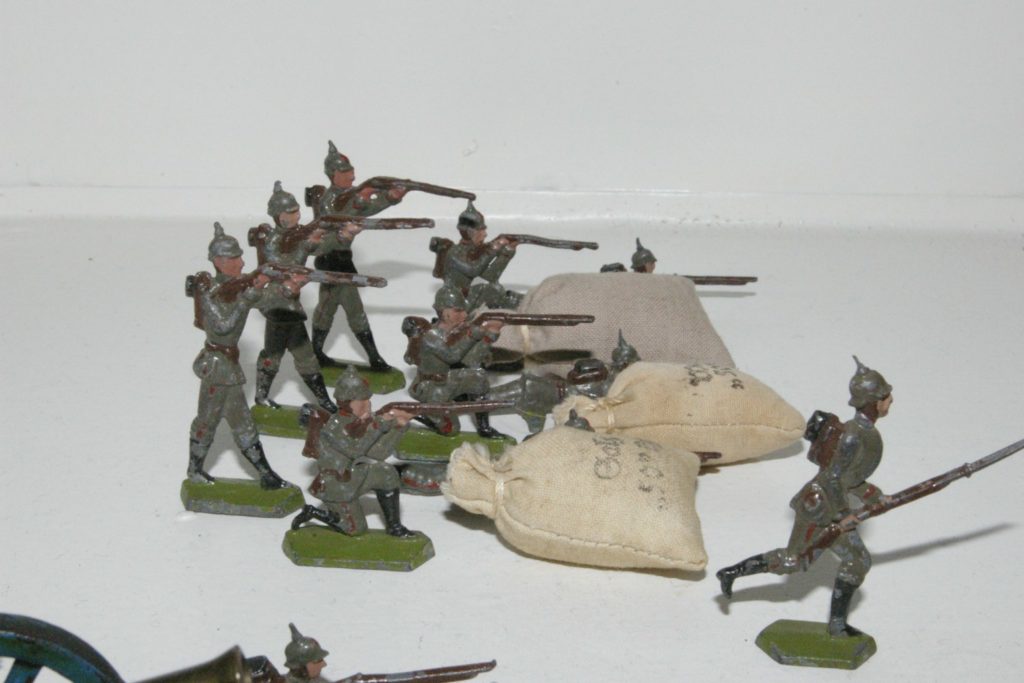 3. Solids: The most life-like and most popular today. These are are round where they should be and can be casted as a solid or can be hollow-casted.

The history of the toy soldiers

The solids are very suitable for the representation of real forces and so becomming actually model soldiers. Toy soldiers were used by children to play with. But were also used for educational reasons, for instance to tell them about the social structure or to become aquinted with the leaders of the country. They were also used by adults to fight war games as a pastime or for instructive purposes by the army itself. Toy soldiers of good quality are popular collectors’ items now. The quality is gained from detail in the casting and the painting. As well as the material used and the veritey and rarerity.

Boys have always been intrigued by war toys. When the Egyptian prince Emsah was buried almost four thousand years ago, he was accompanied in his grave by a unique collection of toy soldiers, which today shoulder by shoulder march steadfastly forward on their wooden bases in the museum in Cairo. Before the modern period, toys were a luxury reserved for the rich and powerful. The French queen Marie de’Medici gave her young son, the future King Louis XIII three hundred silver toy soldiers. The royal collection at Rosenborg Castle in Copenhagen has a collection of silver soldiers made by the silversmith Fabritius for King Frederick IV. French king Louis XIV had a similar army, which however was melted down during the economic crisis of 1715. Catherine the Great of Russia wrote in her autobiography that Tsar Peter III as a young boy had several hundred toy soldiers made of wood, lead, starch, and wax: “They were all paraded on festive occasions, and a special arrangement of springs which could be released by pulling a string, produced a sound as if they fired their guns.” It comes as no surprise, then, that the French emperor Napoleon presented his son, the king of Rome, with a large number of toy soldiers. The finest were a set of 117 gold figures made by the goldsmith Claude Odinot.

Solid toy soldiers as they are known today appeared around the middle of the eighteenth century. Among the first producers of flat figures were the Hilpert family of Nuremberg, Germany. The figures were inspired by the colorful uniforms of Napoleon Bonaparte and the Prussian king Frederick the Great. It is probably figures of this type that inspired the Danish fairytale writer Hans Christian Andersen’s tale “The Steadfast Tin Soldier.” 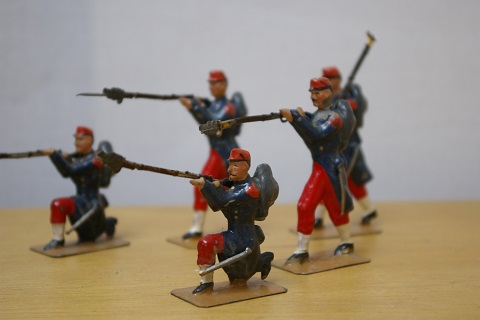 The first literary reference to round and solid figures, rather than flat figures, was in the German poet Goethe’s Dichtung und Wahrheit (Poetry and truth). Goethe describes a boy and a girl who are playing with some tin soldiers that are “round, solid, and meticulously made.” The French producer Lucotte started his work before 1789 but no figures made before 1850 were known to still be in existence in the early twenty-first century. One of the greatest collections of these figures are preserved at Blenheim Castle in England, and belonged to the British wartime prime minister Sir Winston Churchill. He describes his army in his biography My Early Life: “I had almost 1500 of the same size, all British and organised in an infantry division and a cavalry brigade. I had 15 fieldpieces but lacked a train. My father’s old friend, Sir Drummond Wolff, noticed this and created a fund, which to a certain extent remedied this.”

In France the Lucotte Company was bought by the French toy firm Cuperlu, Blondel and Gerbeau, in 1825, which was bought in turn by Mignot in 1876. Mignot continued to exist into the twenty-first century. Besides soldiers, the company produced a number of interesting sets. They can be recogniced by the brownisch square base plates.

In Germany the most prolific toy soldier manufacturer was Georg Heyde from Dresden. Heyde made 4.5 centimeter round, solid figures, with interchangeable heads so that each body could be used to represent the armies of a number of countries.

In England there was Britains, founded in 1893 and developed a special metal-saving way of casting hollow figures that became very popular. They often have a moveable arm that sets them apart. Britain was still producing toy soldiers into the twenty-first century, but the figures became far too expensive to be used as toys and were mostly directed towards collectors.

There are many other old manufactures that started producing in the 1800’s up until the 1940’s. The scarcety of materials during the Wolrd Wars as well as growing strength of the parties named above made the small ones disapear from the market. These small ones were amongst others:

After the World Wars there were new companies that started to recreate the old figures using the original molds or using the original figures as an example. There are also new companies using nieuw materials and technologies to make model soldiers in every detail, but these are no longer sold as toys for boys rather then for the grown ups that like toy soldiers still….and who does not?! This concludes the Toy Soldiers general history. You can find toy soldiers for sale here in the according category on www.vintagemanstuff.com.

Toy soldiers in the modern times

In the 1960’s until well in the 1980’s the making of your own toy soldiers came into fashion. Some of the brands then producing moulds for the public still exist today. The most well known are Airfix, Meisterzinn and Zinn-Brigade. These form mostly produced half round and full round figures in the 50 – 70mm sizes. After that the very small full round soldiers 25 – 35 mm came in fashion, sold as part of armies you can play with on a battlefield with rules developed by Warhammer. Many of the toy soldiers of today are cast in plastic rather then pewter / aluminum or lead alloys.