There are many ways to make slow coffee. At the birth of the Durobor stands the methode commonly known as “drip style coffee”, where hot water runs through a filter holding the coffee grind. For instance the Melitta Coffee filters are a good example of this. In stead of making 4 – 12 cups of coffee at once in this matter, the design of the Durobor coffee maker from Belgium is aimed at making a Single Cup, ready to drink. It is also known as the one cup drip pot methode and only needs boiled water to make coffee no need for a stove. This article will look into this somewhat obscure or less know coffee making machine.

What is a Dur-O-bor and how is it used?

Well for starters it is a piece of coffee making history that is so specific that the brand name Dur-o-bor, and later Durobor became synonymous for the apparatus shown below in a very rare original cardboard box. 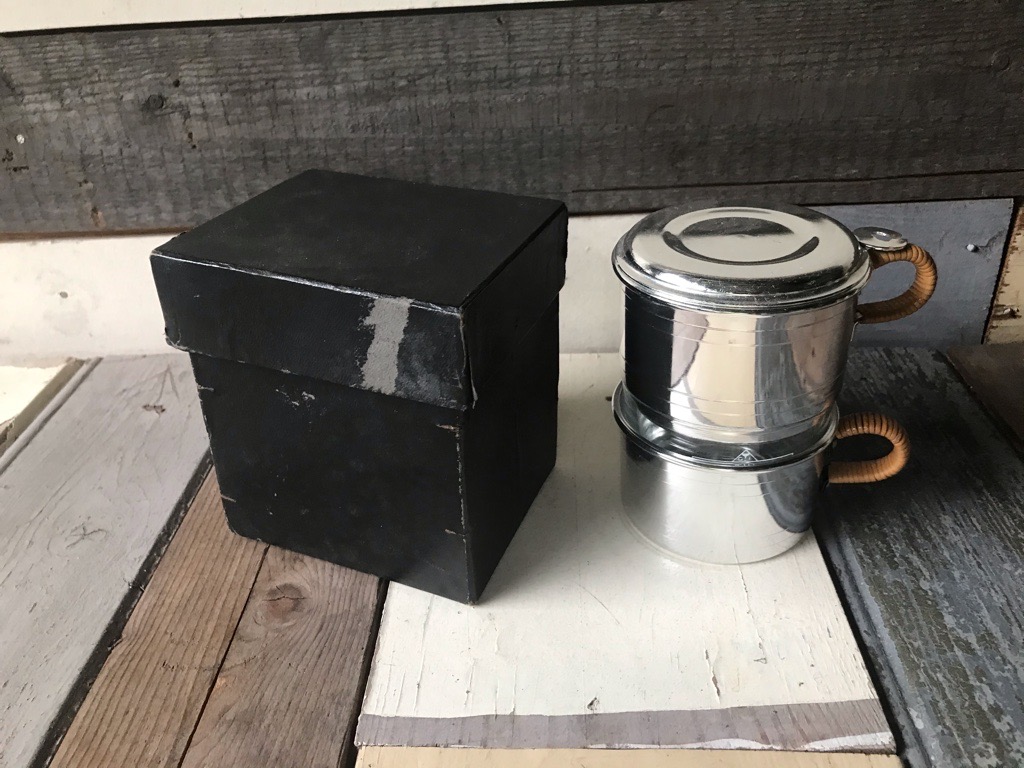 The Durobor is made up of 5 different pieces that work together to make 1 cup of regular coffee, drip style or Americano. Below are the 5 pieces shown. There is glasss with a holder so you will not burn your fingers. Then there is the top coffee filter with holes in the bottom. Inside this top pieces fits the push down filter element, aso with holes. And last there is a lid to keep foreign matter out of your brew, fitting the top piece but can also be kept on the brewed coffee before drinking. 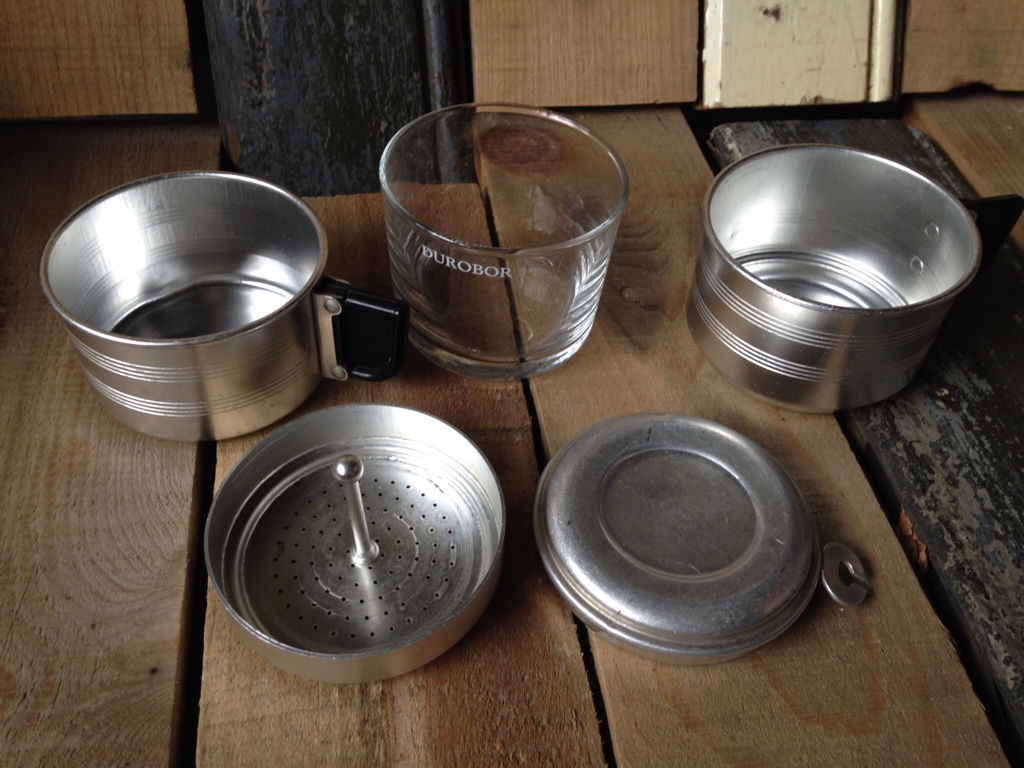 How it works exactly is best shown in a video from youtube which I placed here for your viewing pleasure. There are multiple video’s to find on youtube so more then enough instructions there. Here is one I found particularly clear and comes with English instructions.

History of the Durobor company (1928 – present)

In 1928 in the city of Soignies in Belgium the company named “Compagnie Internationale de Gobeleterie Inébréchable” was founded which is French for the “International Company of unbreakable glassworks”.  In the 1930’s the company refined the treatment of flame-finishing their glasswork which resulted in extra hard rims on their glass products, which in the French language is “dur au bord” which pronounces like “Dur-o-Bor” which became the new name of the company around 1935 and later became Durobor, just different writing. This way their trademark hardend glasses is reflected in the companies name and is true to the present day. During the 1950’s – 1970’s the company grew by making quality products including the Durobor coffeemaker. The metal parts were made by different companies that were also incorporated to the Hainaut group of which Durobor is now a part. The modern plant is still a producer of modern glassware for bars / restaurants and set apart by the bubble in the thick bases. The no longer produce the Durobor coffeemaker nor do they make replacement glasses for them. 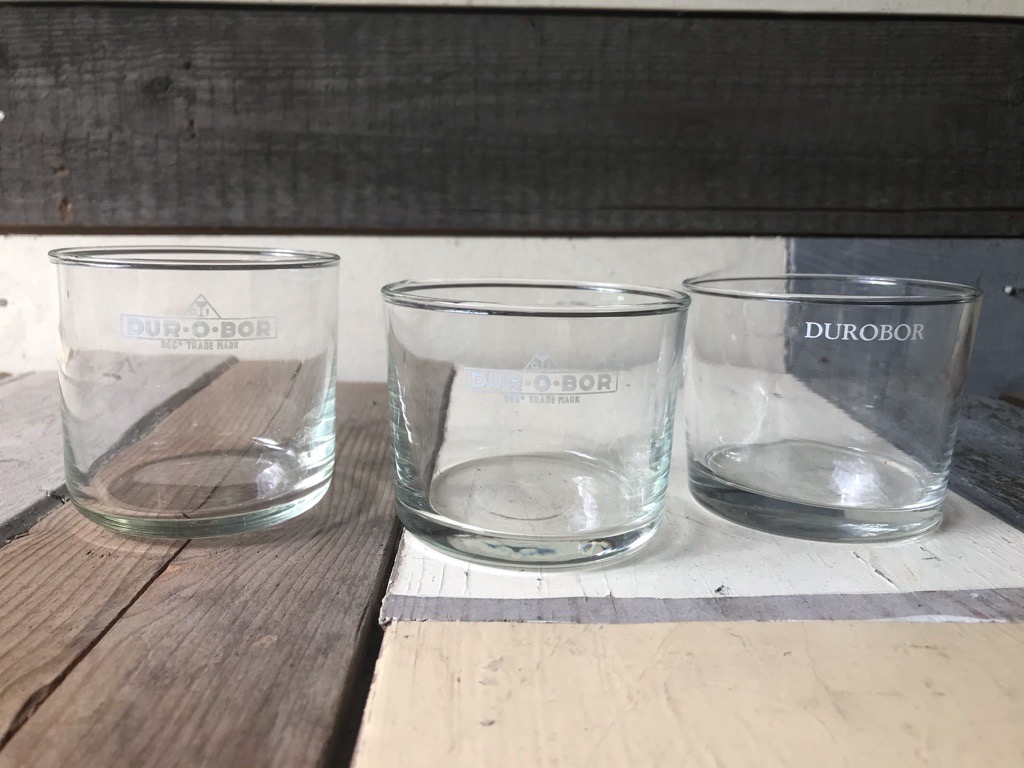 The picture above show different models of the Dur-o-bor glass where the 2 on the left have the older logo which was changed to “DUROBOR” somewhere in the 1970’s – 1980’s it seems.

The Durobor I found have been produced ca. 1950 – 1980 based on their styles. What I gather from the Durobor company in general is their ability to move with market trends in combination with innovation of the production methods. Since they are a glassware maker it seems logic they attract their metal parts from a different company which could have been part of the Hainaut group (as described above) or a company from Germany, France or the Netherlands that was able to supply the metal parts of the Durobor. Since the size of the glass is mostly the same I think it is fair to conclude that the metal parts were made to fit the glass, not the other way around. 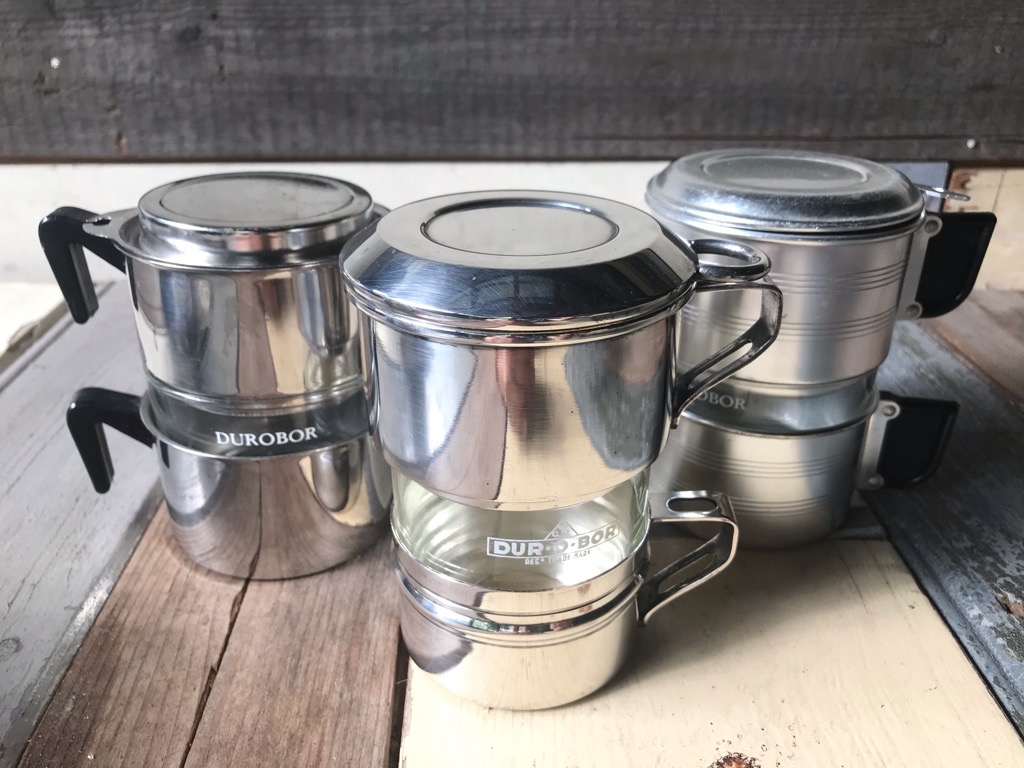 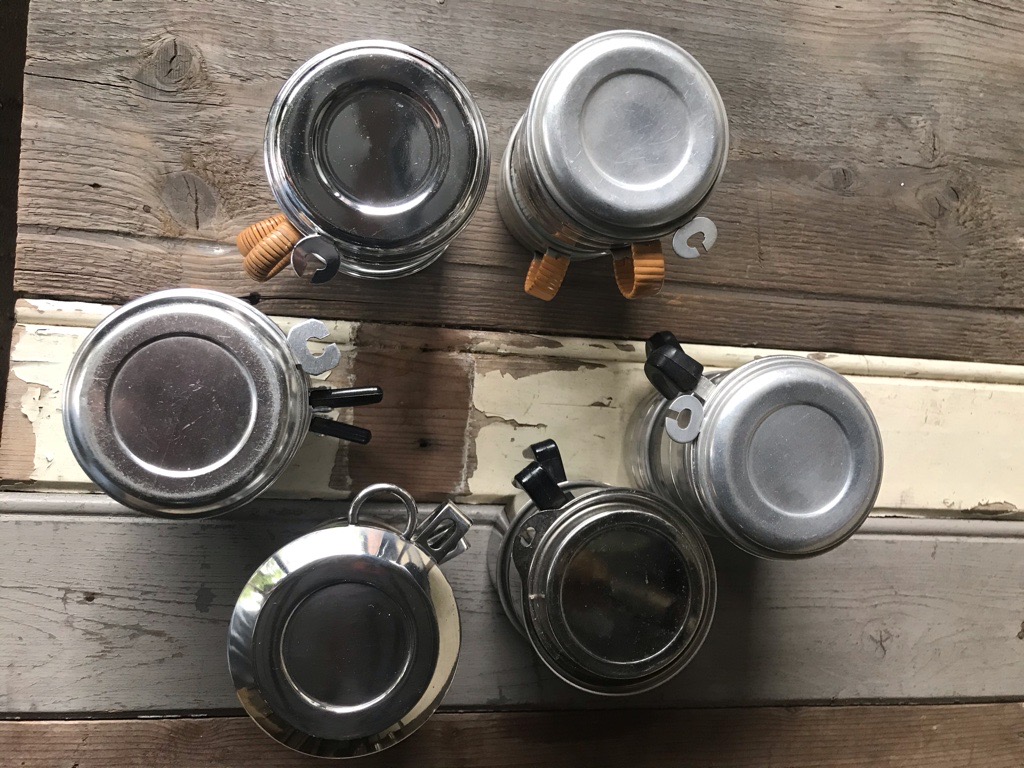 The pictures above and below clearly show the differences in design. The tops are different, as are handles and their materials but the picture also shows a difference in metals used by their color and shine. Also the inside filter was produced with obvious differences. I do not think this was done from a trend reason but rather depended on the metal used in addition to perfect the performance and usability of the one cup drip top coffee maker as a fully functioning mini coffee machine. 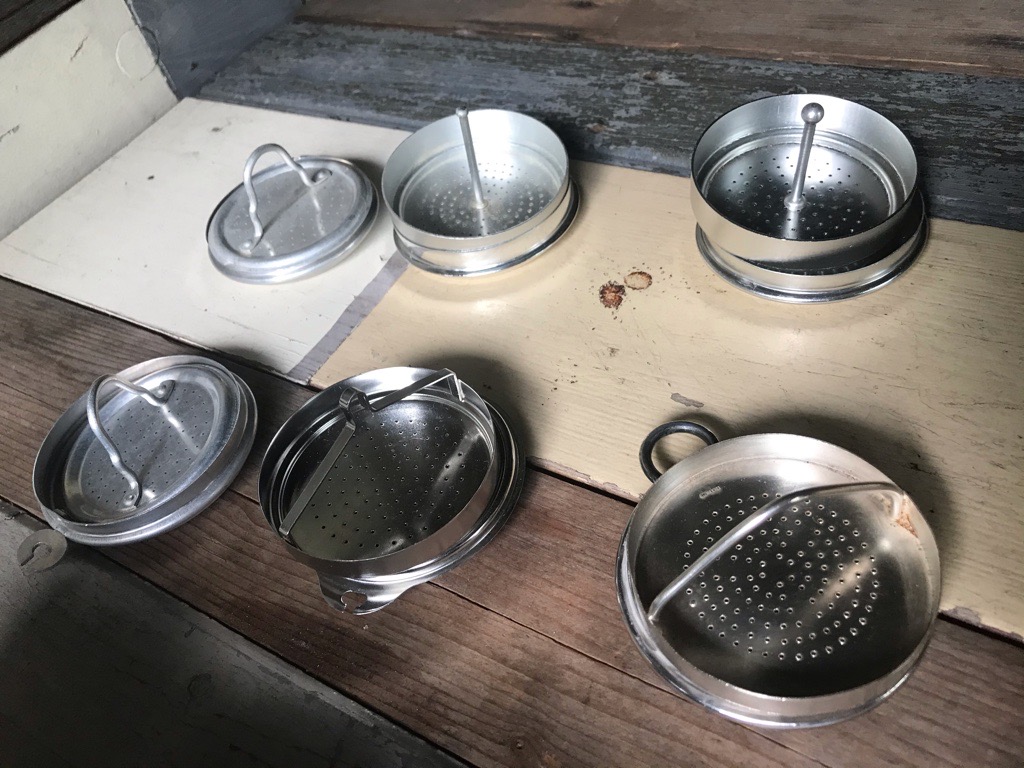 Aluminium is the most used material in vintage coffee makers. Specially when looking at stove top moka pots or espresso makers. Aluminium was used because of it great heat conduction properties. In addition it was a modern material and it could easily be produced with a high shine as well as more dull or brushed effect. A big problem with aluminum that it can not be soldered, so it needs riveting for the attachment of the different parts. Below are the 3 version shows that I have come across so far. They are roughly 1950 – 1970 from left to right. 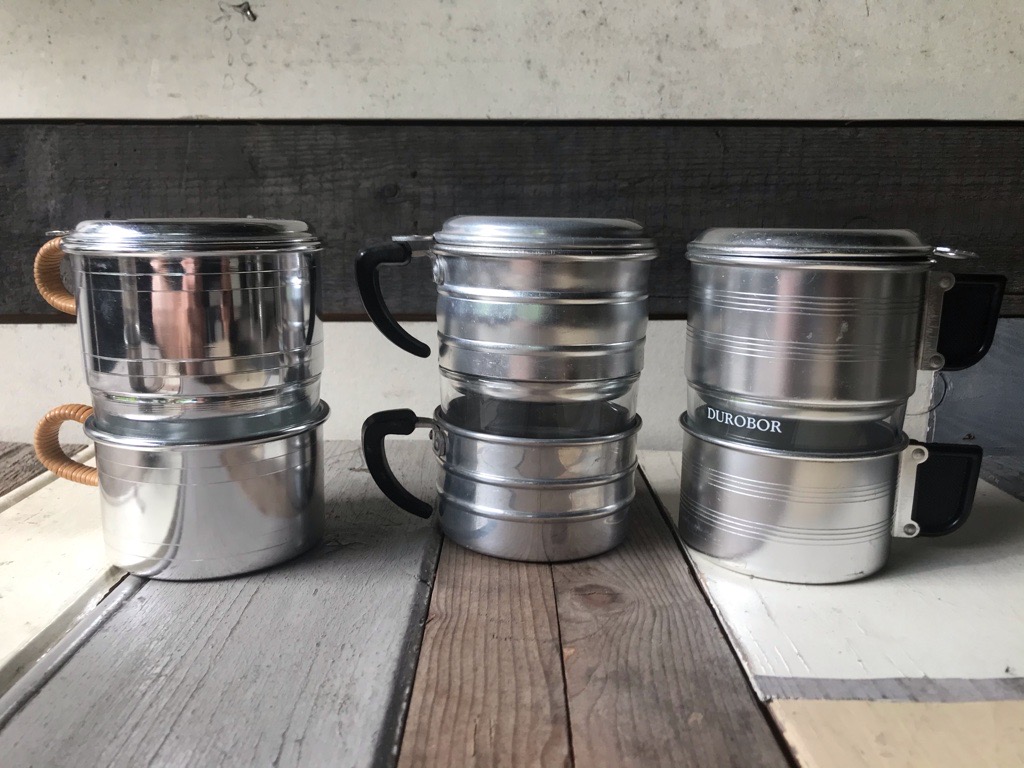 I also found the one shown below. It is made of stainless steel and therefor probably late 1980’s when aluminium was being replaced by steel in many kitchen tools for it’s ease of cleaning and lack of aging. In addition it was getting cheaper and easier to manufacture and pars could be fixed together easier as well. The modern design of the hard plastic handles seem to underline this period. 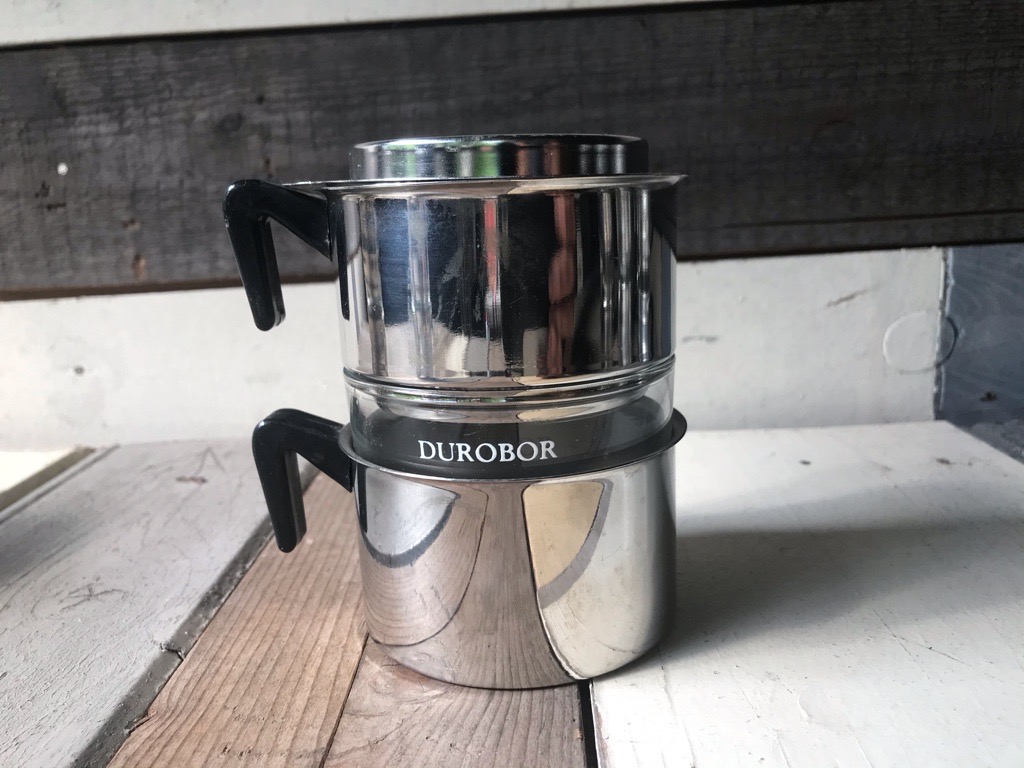 An odd one is the silver plated version as shown below. According to the logo it is early and I can imagine it being a more expensive version of the aluminum ones shown above. It has an ornate lining design in the base part and has more weight to it then the aluminium versions as well. I think this one has been sold over a longer period but as could be as early as the 1950’s. 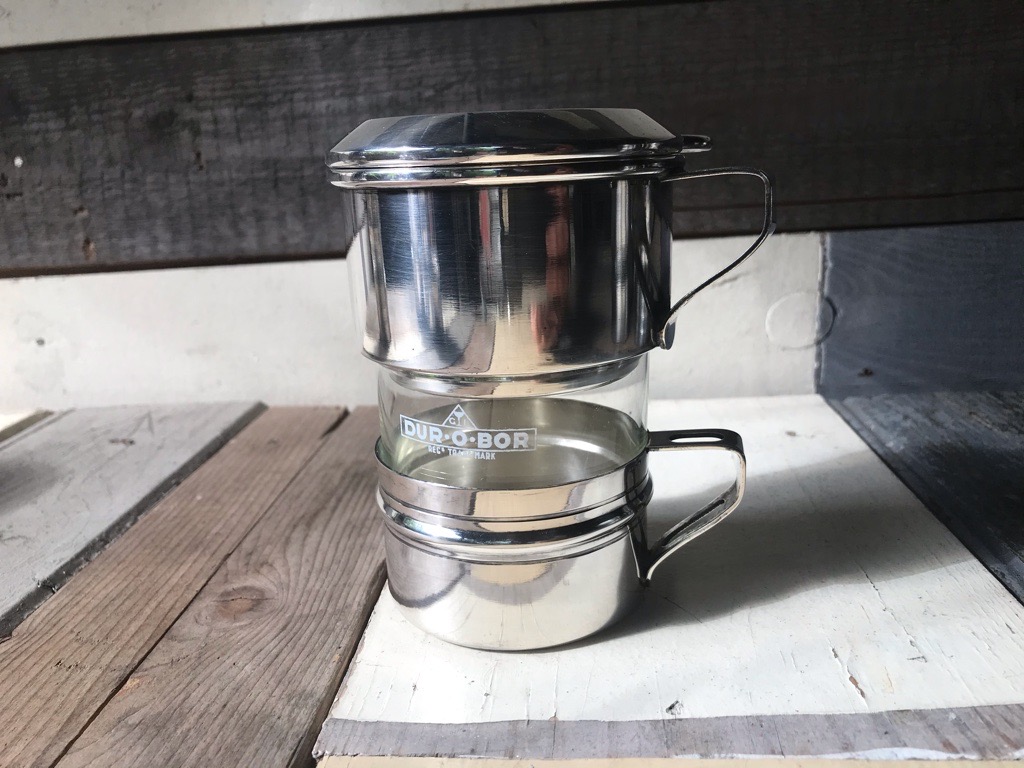 I could not find any patents by the Durobor company for their drip style coffee maker. As described above, Durobor made the glasses for this coffee maker, not the metal bits. So in practice could every metal manufacturer make the metal bits themselfs as long a they were able to source other glasses to fit their machine. I did find durobor style makers as shown below in different forms and materials with different glasses. 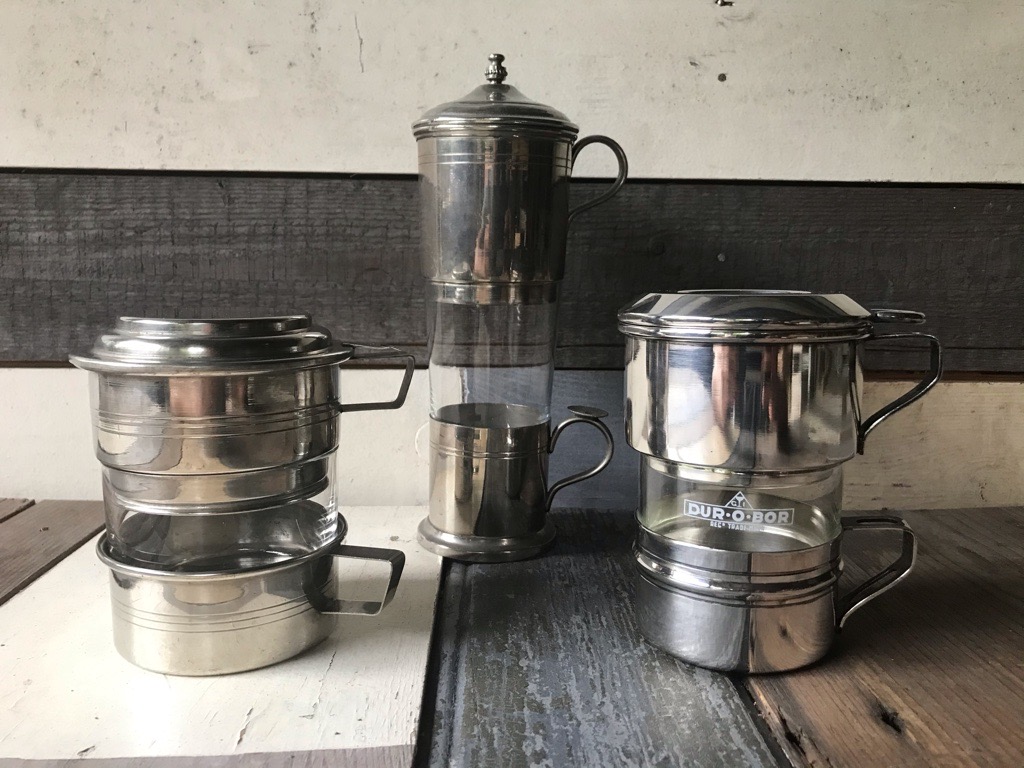 The one on the left is nickel plated, something I did not see in a Durobor and the glass that came with it is unmarked. It could be that the brand name on the glass faded over time or it could be a third party made. The middle very tall one is a totally different design and has a very old glass with imperfections in them. The metal bits are chromium plated, again not seen before in Durobors. This being said I do need to point out that I found a similar looking machine that did have a Durobor signed high glass in it. These are very early by the way, I would say 1930’s – 1940’s. So hard to say if these are, or are not Durobor made. 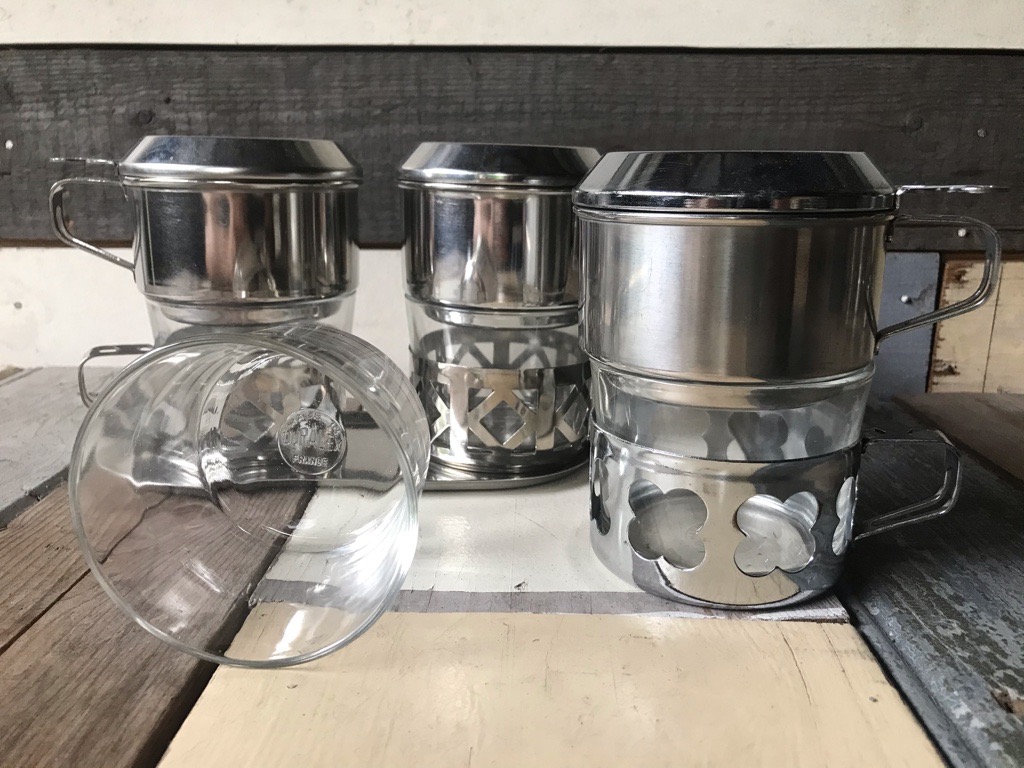 Then there are the many 1980’s – 1990’s Durobor I see in stainless steel as pictured above. This almost always have a Duralex signed glass in them. The bases are almost always open where the openings have a simple design. The handles and the C-shaped (welded) handle on the top are almost always the same shape. These are from around the time that Durobor stopped making them it seems. So there are several possibilities. Perhaps Durobor just stopped making them, perhaps Duralex just made replacement glasses because Durobor did not, or perhaps the metal manufacturer rather worked with Duralex then with Durobor. Duralex is French so it is also possible that this is a compelte French manufacture, rather then Belgium. This could be the case after Durobor no longer hold the patent (that I could not find)..who know.

Small update for anomalies which can support the above line of thought or may show there was a wide variety of makers. Below is shown a aluminium Durobor with a Duralex glass, where the bottom is clearly stamped Italy. This seems to have little to do with Belgium. Also the design of the clover I have not seen in any Durobor marked pieces. Could be an Italian market clone…or perhaps even the original where Durobors where build upon? The overall design and build put’s it around 1960. You can see it in all it’s splendor here. 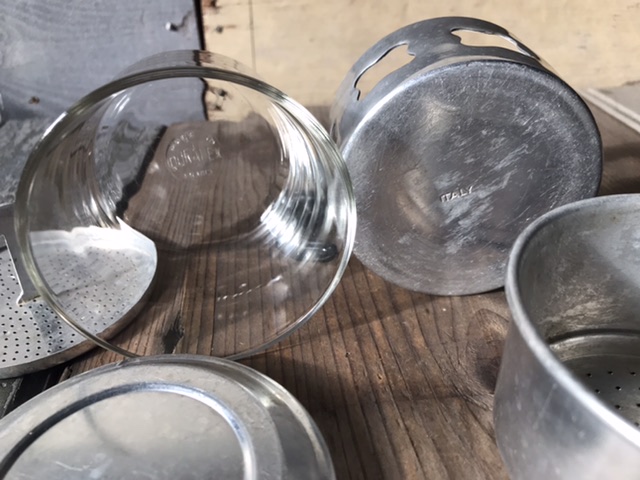 I also came across the one below. Again a little different design. This time from the 1980’s in stainless steel with very ornate handles and a shield shaped opening. You can find more pictures here. It has again a Duralex glass but the small stamp is most interesting. It reads Metawa Holland a Metalware manufacturer from the Netherlands. So the plot thickens… 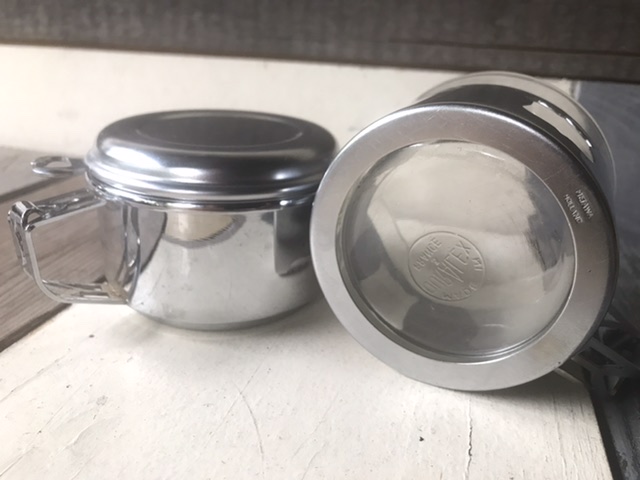 When drinking slow coffee with a small group of people at home or serving slow coffee in a restaurant or bar, the single serve drip style Durobor could be the choice for you. There is plenty of styles to choose from and they are easy to operated. So not only looking good but very practical and stylish for your personal cup of Joe. Just be careful not to remove the white brand printed on the glass and of course with the glass in general because they cannot be replaced. Enjoy your coffee!

2 thoughts on “Collecting Vintage: The Durobor or Dur-o-bor Coffee maker”